Almost 40 years since the discussion about 21st-century skills (21CS) started, where are we now and what exactly is the general consensus in 2021? Whilst there are so many frameworks and definitions out there, how do we define 21st-century skills?

For teachers and students in the classroom, what do these turbulent uncertain times in the outside world mean to education? Are schools keeping up with the demands of 21st-century learning or are they simply inundated by technology that they actually need to take a step back and refocus on their pedagogical core? These are some of the questions I will try to discuss in this blog series on 21st Century Skills.

To start let's look at where we are in 2021. For example, this tweet by the OECD below might give an indication on the relationship between technology and education. What do you think? 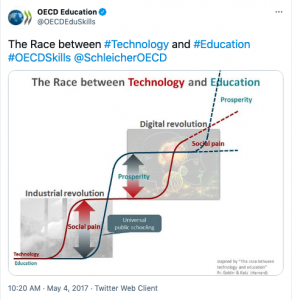 Some would argue that the classrooms of the 21st-century have not progressed as quickly as we would like. So is it a matter of difficulty to embed 21st-century skills into the classroom or perhaps we have yet to find a global consensus on what 21st-century skills ought to be? Maybe we need to stop talking about them all together and consider developing “timeless dispositions” to prepare students regardless of what century we are in.

In this table below, I have lined up side-by-side three of the most recognised frameworks in use by various curricula worldwide as benchmarks. What similarities do they share? Is there a pattern that can help us identify a general consensus?

What they have in common.

Firstly, these frameworks seem to categorise 21CS into three broad components: Knowledge (or hard skills), Competencies (or soft skills) and Traits (or Characteristics and Mindsets). Thus, the rise of soft skills and mindsets have become equally important to acquiring foundational knowledge, pertinent to traditional curricula.

Secondly, significant emphasis is placed on ICT literacy, whilst newer conceptions of literacies such as media and cultural literacies are growing in importance. Certainly, numeracy, literacy, and science remain at the core of foundational knowledge (as traditional school subjects).

Moreover, the Four Cs (critical thinking, creativity, collaboration & communication) figure consistently are key elements within these frameworks. So, many would argue that these are fundamental soft skills to have in the 21st-century workplace.

Lastly, topics around civics, citizenship, and cross-cultural awareness feature prominently in all the frameworks given the increasing complexity and cosmopolitan nature of 21st-century society. As a result, Thinking like a Global Citizen has become a key trait when developing other key skills such as problem solving and collaboration. (Not sure what exactly Global Citizenship means? Check out this blog post.)

Is there a general consensus?

Despite the different names and structural frameworks that have been developed over the past few decades, there are certainly converging signs of a global consensus towards a more universal definition of 21CS. Though there has been continual effort to incorporate 21CS into the classrooms of today, it has to be acknowledged that traditional literacies still dominate how education is assessed and ranked. Unfortunately, the focus is still on knowledge-based credentials rather than competencies. Therefore, I would like to continue this discussion by looking at the following questions:

Are you interested in teaching the Four Cs, Global Citizenship, and other 21CS in your classroom? Our FREE video on demand platform has hundreds of high-quality educational videos both for professional development and classroom use with your students. Why not check out this blog post on how to teach 21CS in the classroom.

Stay tuned for our future blogs on 21st Century Skills by following our social media channels on LinkedIn, Twitter and Facebook

We’re a team of media professionals and educators that want to inspire a generation of global learners through smart, engaging educational content they love.
More about our services
Licensing Production
Education Global Citizenship

Makematic Partner with Newsela for Back to School Video Refresh